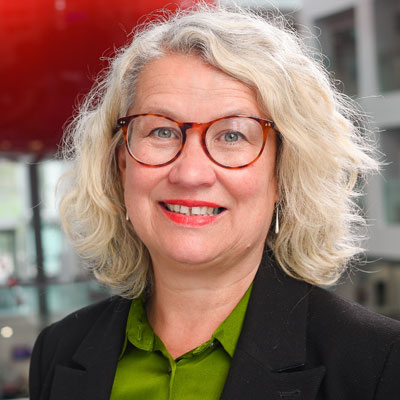 Julie was appointed Deputy Vice Chancellor in March 2017, having previously been Deputy Provost (Academic Development) at Roehampton University London. Julie has oversight of the following areas:

Julie has over 30 years' experience in higher education as a sociology lecturer, course leader and as a senior manager in London. Before joining Solent, she was Deputy Provost (Academic Development) at Roehampton University London and before that Dean of the Roehampton Business School and Director of Academic Enhancement with responsibility for learning and teaching and research. During this time Roehampton became the top modern university for research while gaining a reputation for its student partnership working and learning and teaching.

Continuing to write about equity and the student experience, Julie has successfully bid for projects worth more than £1.5 million to enhance learning and teaching. In 2012 she was invited to join the QAA expert panel to develop the Code of Practice in Teaching and Learning.

Originally from the Midlands, Julie went through clearing to secure a place at a London university studying English and Sociology after a last minute change of plan. She went on to teach at a higher education college in south London and take a masters in Urban Education at Kings College London and a teaching qualification at Garnett College. She has three adult children and has moved to Southampton with her husband.