Graduate's film on grief gets broadcast

Sofie Klingberg Kruhoffer, who graduated in MA Film Production in 2013 will see her MA Film “Sorry I am Grieving” air on Danish television.

Sofie Klingberg Kruhoffer, who graduated in MA Film Production in 2013 will see her MA Film “Sorry I am Grieving” air on Danish television. The film was produced under the supervision of senior lecturer in Film Production Stephen Desmond, won Sofie a commission from Danish television to make a series of films on the topic of loss and bereavement. The three part series will be broadcast on the main national Danish television Channel DR1 in January 2016 and is entitled:“Let’s not talk about it!”

We caught up with Sofie to find out about her journey creating the film and how she found the courage to share her story.

If someone had told me five years ago that I would one day tell the public about the greatest loss in my life – the death of my mother when I was just 16 years old – I would not, for one second, believe that person.

But studying at Southampton Solent University changed me a lot. It made me less afraid of public opinion; what people might think of me and my work.

It made me realise I had to pursue the stories that I felt were the important ones. If I could feel it so would the audience.

The competent and highly experienced lecturers, Stephen Desmond and Mark De Valk, gave me the courage I needed to allow myself to be vulnerable, and to use that vulnerability as a source of inspiration. I made a final film at university under the supervision of Stephen, which told the story of my mother’s death and my experience afterwards. I showed this film to DR1 (Danish TV) and they commissioned me to make a series of three documentary films dealing with bereavement. The series is named “Mom died but let’s not talk about that” and will broadcast in January 2016.

I started out making the news

Before moving to England to study, I worked as a news journalist in Denmark. Making the news was fun and challenging but after a few years I started to feel like a dog chasing its own tail. Each story felt like the one I did the day before.

Being a news reporter I always felt like I was putting on an act – pretending to be someone I was not.

Filmmaking at Southampton Solent University was very different from this. The teachers were, in fact, interested in getting to know me as a person and I found myself sharing personal experiences, good and bad. This made me think that filmmaking is about doing your very best to display reality, even when it is not pretty, even when it is cruel…

With the encouragement of Stephen I finally decided to do the documentary on the death of my mother, and how this has affected my life a great deal. In my experience, when you lose someone close to you people often tell you to ‘move on with your life and let go of the past’. Friends and family never gave me the space to grieve and this made me very lonely.

With this film, I wanted to challenge the idea that we must move on in life quickly. I often felt like my grief was turned into a disease that had to be cured. But is it, in fact, a disease, or is it a basic condition of life? Is grief the price we pay for loving someone? These are some of the questions I raise in the documentary “Sorry I am Grieving”. 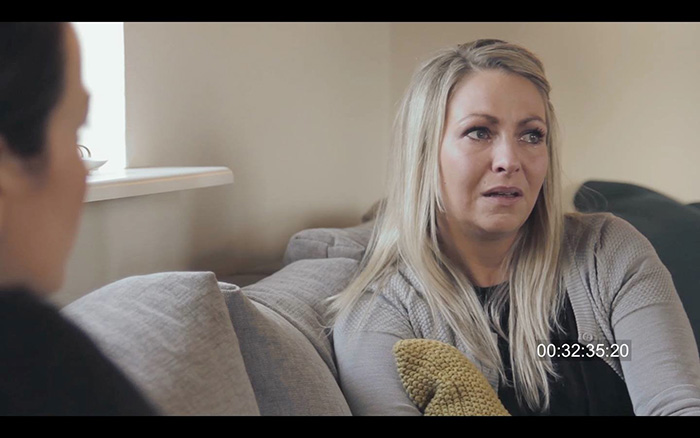 After losing my mother I attended a grieving group. You meet up with other kids who have also lost a parent and you share your experiences with them. In other words, you help each other out. A camera crew filmed us for half a year to make a film about grieving kids. Many years later, when studying at Southampton Solent University, I contacted the Danish filmmaker who made this film back in 2002. He agreed to look at my own film which was produced as a final project on the MA in Southampton Solent University. This meeting turned out to be crucial as it resulted in the collaboration between us a few months later. Having seen my work, he called me to ask if I was interested in doing a series on grief for national television in Denmark.

This is how my documentary, made at Southampton Solent University, turned into a series on grief for national television that portrays not only my own story, but also the story of Trine who lost her whole family, Eva who lost her mother and Tim who lost both his parents.

Lecturer Stephen Desmond said: “I am delighted that Sophie Klingberg Kruhoffer has had this success with the film she made during her MA in Film Production at Southampton Solent University.

“I was very impressed with her creative talent, and her final MA film dealt with issues that were close to her heart and, indeed, close to my own heart as well. It was a wonderful experience to supervise this project and to work with Sofie. And it is fantastic to see that her film project has grown into a three part series on Danish national television.

“It is an important documentary film that breaks new ground and she should be very proud of that and of the work she has done.”

The three part series “Let’s not talk about it!” will broadcast on the main national Danish Television Channel, DR1, in January 2016