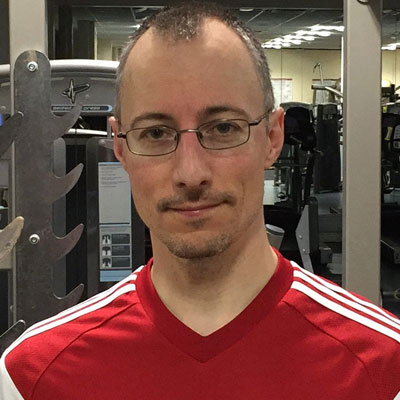 Adam completed his first degree in sport and exercise sciences at the University of Birmingham, followed by a master's in human nutrition (sports) at London Metropolitan University and a second master's in strength and conditioning at St Mary’s University. During this time, Adam has spent nearly 20 years working in the fitness industry, including as a gym instructor, health club manager, personal trainer, nutritionist, and strength and conditioning coach.

Adam is an accredited S&C coach with the UKSCA, and holds NSCA certifications as a strength and conditioning specialist and personal trainer. Qualified level 2 British Weightlifting Coach and level 2 Athletics Coach through England Athletics. Academically, Adam is a fellow of the Higher Education Academy (HEA) after completing a Postgraduate Certificate in Teaching and Learning in Higher Education.

A fan of most sports, Adam played American football for six years in his younger years, along with several martial arts, before trying his hand at a wide range of events - everything from bodybuilding to endurance running, completing three marathons and several half marathons and 10k races. Nowadays he is turning his attention to masters and veteran age-group competitions in track and field, and weightlifting.

Adam has been working as a lecturer at Solent University since 2014 and has been the course leader for BSc (Hons) Sport Coaching since 2017. His lecturing is primarily focused on the topic of strength and conditioning, having taught on units relevant to sport fitness at all levers from foundation to master's.

Over the years, Adam has trained people from most walks of life, including special populations such as clients with autism, fibromyalgia, blindness, diabetes, and cancer. Adam has also coached strength and conditioning to athletes in sports ranging from triathlon, skiing, trampoline, football, rugby, American football, fencing, karate, and athletics. Adam completed his UKSCA accreditation whilst working for a year with a member of the GB Women’s Ice Hockey team, supporting her return from six weeks in hospital to become the number one woman across almost all of the GB fitness tests at National Camp. One of Adam’s proudest achievements as a coach was working with a GB paracyclist who went on to win two silver medals at the Invictus Games.

Adam has also taught on the following modules:

Areas of interest include most areas of strength and conditioning and sports nutrition.

Has conducted workshops to local schools on strength, speed and agility development, written and delivered workshops on injury prevention, such as ACL risk reduction, and Olympic Weightlifting workshops.

Adam is actively pursuing a PhD in the field of strength and conditioning, focusing on the testing and development of muscular strength qualities. He is also continuing to maintain standards required for re-certification by completing short courses, attending conferences and presenting seminars and workshops.