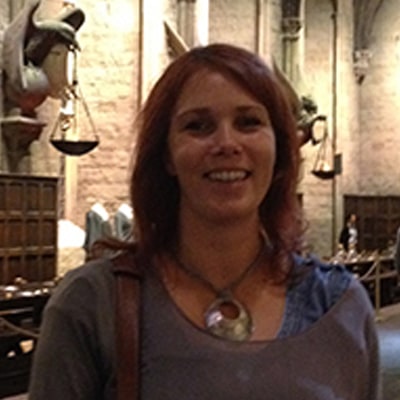 Annie was trained at Brunel University, gaining a BA Hons degree in drama and music, specialising in voice and physical theatre.

She worked on cruise ships as a lead singer for five years and then re-trained at Drama Studio London, gaining an NCDT post-graduate qualification.

Annie worked as a professional singer and actress for 10 years before having her children and returning to Southampton. Here she gained a job at the NSPCC working with theatre to help vulnerable children, and set up a series of workshops and courses that considered theatre and wellbeing – working with the NSPCC, Sure Start MRM and Southampton City Council. Annie pioneered a series of workshops entitled “Stand Tall” which explored the physical theatre world of LeCoq, Laban and Boal to enable participants to explore alternative ways of physically, and therefore mentally, being.

Annie worked for the NSPCC directing and writing several community projects and then developed her writing further at the Nuffield Theatre’s writing group with John Burgess.

Now Annie’s main interests are in voice, singing and musical theatre, and directing. She teaches on both the BA (Hons) Performing Arts and BA (Hons) Popular Music degrees at Solent, as well as teaching musical theatre at Portsmouth University and speech to song at the University of Winchester.

Annie’s directing credits include: Follies, Rent and Cabaret at Solent University, and The Lion King, Cats, Oliver, Honk, Beauty and The Beast and Fiddler on the Roof at primary, secondary and FE level.

Her main focus is teaching Estill Voice Craft technique and she has been trained by Vocal Process' Gillyanne Kayes and Jeremy Fisher.

Annie loves her work at Solent and is always looking for new challenges and adventures: ”I love working with students and allowing people to find their own form of expressive vocal and physical communication.”

Annie still works as a professional singer and actress. She sung locally at the Joiners as a teenager with The Firekites and went on with her band Frontside to sing at Glastonbury and the Eclipse festivals as well as being a frequent vocalist for Michael Sassen at MegaDog. As a backing singer for Sarah Nixey and Black Box recorder, she has performed at Islington Academy and the Commedia, Brighton. Annie collaborated with Jamie Simmonds in Earthed where their song Awakenings was released in 2006 with Soundseasy records.

Her acting credits include winning two Time Out Critics Choice awards for her performances in Blue Remembered Hills and The Libertine at the Battersea Arts Centre, as well as playing Charlotte Gray in a BBC Omnibus special about Sebastian Faulks.

More recently she has performed in local acting projects: playing 'Hecuba' in @ Troy, Theatre Royal, Winchester, for Deborah Gearing and Fiona Mackie; 'Hope' in Wind and Water, a Now Heritage project; and last year played 'the mother' in a commissioned play about Agincourt at the Great Hall, Winchester.

She taught LAMDA examinations for four years at the Atherley School, Southampton (Secondary), and from 2003-2015 was a music teacher and drama teacher at Stroud School, Romsey, where she also worked as a peripatetic singing teacher, as well as directing their yearly musicals.

Annie has also held many freelance positions, including vocal coach for Nuffield Youth Theatre (Lord of the Flies), singing coach at Winnall Rock School, and work for Stagecoach Winchester.

Since 2010, Annie has taught on both BA (Hons) Popular Music and BA (Hons) Performing Arts degrees at Solent University – her specialism is in singing, voice and musical theatre, and directing.

Annie is currently working on a project for the British Art Show (October 2016) – which involves her performing in the back of a removal truck!

She is also working on putting together a flashmob for Now Heritage at The Winchester Great Hall, which is bringing Solent University and Totton College students together to perform at the event.

Annie is researching for her PHD on voice and well-being, exploring the Estill set up and whether the physical approach to voice can alter mood and perception.