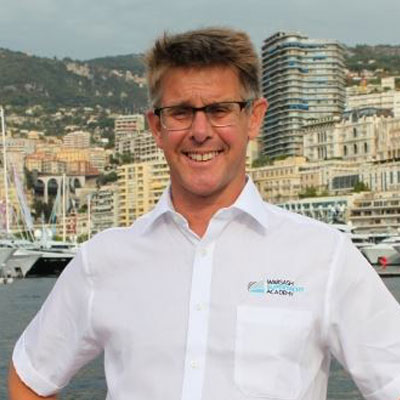 Giles joined Solent University in 1991 and has been course developer and leader of the three yacht engineering-based degrees for many years.

He has a keen interest in hydrodynamics of sailing yachts and more recently his research includes reducing the carbon footprint of motor vessels. Subject specialisms include naval architecture, resistance and propulsion, sailing yacht design and performance, superyacht design and motor boat design.

Giles maintains close links across Europe with the yacht and commercial craft design and production industry via the hundreds of alumni he has taught. These links often enable graduates to find their first employment. Giles also ensures that suitable pedagogic methods are utilised across the degrees to ensure students are equipped with current design tools and skills so they are work ready on graduation.

Outside of the classroom, Giles races a Laser class dinghy and is also a keen photographer.

After graduating with a degree in Ship Science in 1986, Giles began his career as a trainee ship surveyor for Lloyds Register. After working as a surveyor in Southampton, Malta and Belfast, he was relocated to the London HQ, where he became a plan approval surveyor, specialising in structural design of Fibreglass yachts and small craft.

Since 1991, Giles has been employed at Solent University as a senior lecturer and course leader. While at Solent, Giles has been tow tank manager and has completed many resistance and propulsion consultancy jobs for well-known yacht design and commercial craft companies.

Giles has more than 30 years' teaching experience at Solent University.

He is a Senior Fellow of the Higher Education Academy, which demonstrates strong pedagogic and course development skills. He has taught over 1200 yacht and powercraft design and production graduates, most of whom are now well known within the small craft industry. He also is a visiting professor at the University of Liege, Belgium, where he delivers courses in sailing yacht and motor boat performance.

Giles regularly brings into the classroom live case studies and, when possible, live ‘industry-based’ student coursework briefs, both of which bring the subject alive and allow students to get involved in cutting-edge design projects.

He also developed and is lead lecturer on the MSc Superyacht Design program, bringing into the classroom many industry practitioners for the benefit of the students.

Giles' research has been largely conducted around work at Solent University’s 60 metre tow tank facility, initially establishing the resistance and then minimising the hull resistance of vessel if possible. Other work includes researching the hydrodynamic performance of sailing yachts, which includes looking at alternative keel and foil configurations. His recent interests are very much involved with the performance of cutting-edge race yachts, such as Open 60 designs.

On the environmental side, Giles has recently developed a prototype high speed foiling trimaran ferry, which could be capable of being powered using an all-electric propulsion system. Grants are now being sought to further the work completed to date with the testing of a 6m vessel.

1992 Qualified as a MRINA. (Member of Royal Institution of Naval Architects).

1992 Qualified as a Chartered Engineer.

Giles hopes to present the following work regarding his recent research interests.

Barkley G S, Baker-Berry A, Ghezzi G, - The Design of a Low-Emissions Trimaran Fast Ferry with an Investigation into the Applicability of Hydrofoils. (Paper to be presented in 2022).

Do you dream of designing race-winning yachts or multi-million-pound superyachts? Take the first step to fulfilling your ambition by studying on Solent’s unique and...

Do you have a passion for engineering and want to take this into designing performance power- and sail-craft? If you’re interested in analysing design for performance craft –...

Do you have a passion for naval architecture and dream of designing the next generation of superyachts? Solent’s unique superyacht design master’s programme – the only one of...