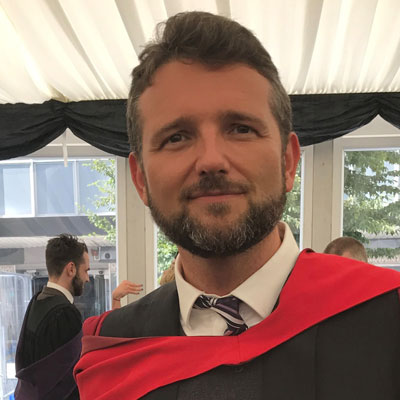 Dr Terence McSweeney is a senior lecturer in film and television studies at Solent University. He is widely recognised as one of the leading writers on contemporary American cinema. He has held research posts at the University of Oxford, Queen Mary University of London, the IAS (Institute of Advanced Studies) at UCL, and the London School of Economics. He is the author of The War on Terror and American Film: ‘9/11 Frames per Second’ (Edinburgh University Press, 2014), Avengers Assemble! Critical Perspectives on the Marvel Cinematic Universe (Wallflower Press, 2018), The Hurt Locker (Auteur Press, 2019) and The Contemporary Superhero Film (Short Cuts) (Wallflower Press, 2020). He is the editor of American Cinema in the Shadow of 9/11 (Edinburgh University Press, 2016), co-editor of Millennial Cinema: Memory in Global Film (Wallflower Press, 2012) and co-editor of Through the Black Mirror: Deconstructing the Side Effects of the Digital Age (Palgrave Macmillan, 2019) with Dr Stuart Joy, which features contributions from renowned scholars such as Henry Jenkins, Sean Redmond, Steffen Hantke, M. Keith Booker and many others.

Terence’s newest book, Black Panther: Interrogating a Cultural Phenomenon (2021), is the first in a new series he is the co-founder of at Mississippi University Press (alongside Dr Stuart Joy) called Reframing Hollywood.

Terence is a Senior Fellow of the HEA. In 2018 he won a Solent University STAR Teaching Award in the category of 'Excellent Feedback', and in 2019 was shortlisted for the Solent Excellence in Teaching Award. In 2018 he was the recipient of the 2019 Everett Helm Fellowship Prize at the Lilly Library, Indiana University. He has been invited to speak at a range of locations including the BFI (British Film Institute), the British Library and UCL.

With its unique blend of critical studies and creative practice, Solent’s highly regarded film and television undergraduate degree will provide you with the skills you need to...

With a wide range of high-end film equipment, a passionate teaching team and a reputation for producing well-rounded graduates, film production at Solent University will help...