Richard, who graduated from Solent in 2005 with a degree in Business and Entrepreneurship, runs a portfolio of businesses including: digital marketing agency, Yomp Marketing; marketing events brand, The Lead Gen Summit; and marketing training company, The Lead Gen Academy.

He said: I am absolutely taken aback by receiving this award. The sense of pride, not just being recognised for my achievements, but for being associated with this University. Solent felt like home the second I walked through those doors on the open day, and since then it’s really flourished."

He recently launched The Digital TrailBlazer, which aims to provide entrepreneurial SMEs  with  a predictable flow of leads every day. The  accompanying book Digital TrailBlazer went straight  to number one on Amazon’s best-seller list and continues to sell globally. Richard went on to  publish a second book Brexitpreneurship - How to win from Brexit, which also went straight to  number one. 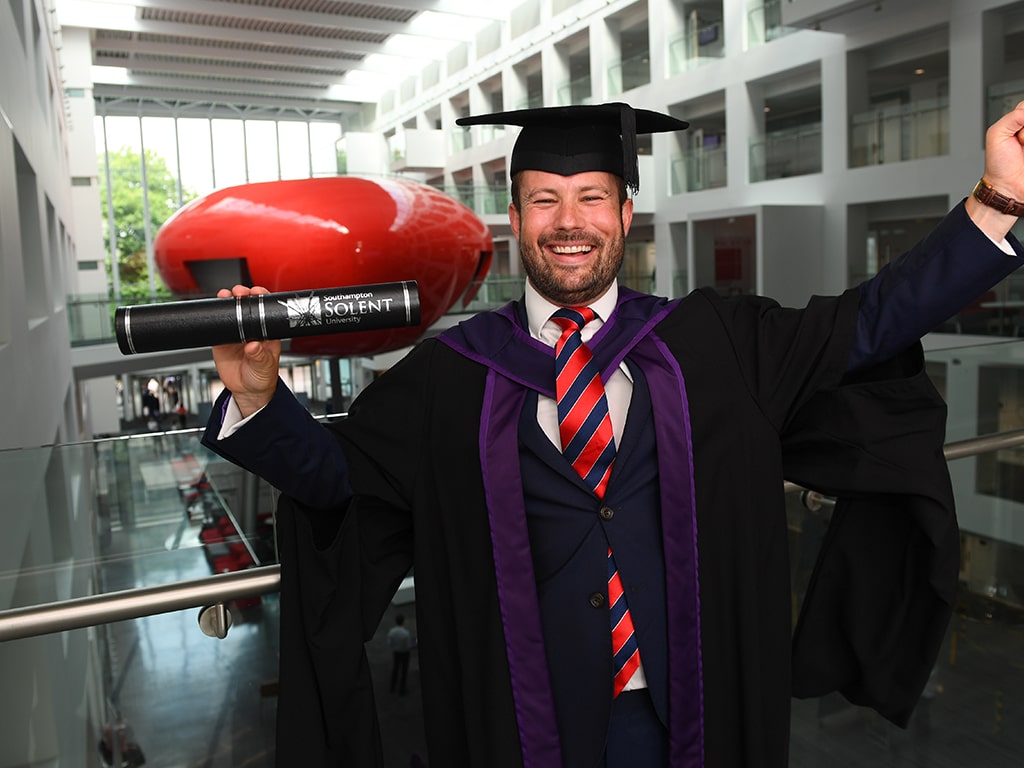 He was a  finalist on the BBC’s The Apprentice, Series 11 (2015) - where he was the top seller across all tasks during the competition.

He added: "Solent was a fantastic place to prepare me for the world of business, something I always wanted to be a part of, but didn't know quite how or if I was ready for it. Coming here, having inspirational speakers talk to me about the world of business, as well as lecturers who were able to broaden my mind and my horizons, prepared me for the world and I can only say thank you for it!"

Richard has won numerous awards including, Young Entrepreneur of the Year (2016), and Key Person of Influence Award  2015  (Dent Global Annual Awards). He makes regular appearances on local radio and  BBC Radio 1, and is a frequent speaker at business events, trade shows and seminars.

Richard is a frequent visitor to Solent, talking at open days and giving guest lectures to current students.

Giving tips to students graduating today he said: "The best advice I can give is to really lean in to everything, get hungry for experience, work and for breaking the norm. Don't settle with just ok – challenge yourself, be interested in something and create something. It's the biggest cliché out there, but go out and change the world!"