“Thank you very much for this award, Doctor of Media,” said Walter.

“It’s a particularly significant honour because Solent University is foremost in combining all the different disciplines that go into making film, and what we might call the larger media of today: graphics, animation, music, camera, story, editing.”

Walter Murch - a nine times Oscar-nominated, three times Oscar-winner for both sound and image editor - is already a Visiting Fellow at Solent, where he gives talks and advice to film and television students.

In 1997, Walter received an unprecedented double Oscar for both film editing and sound mixing on The English Patient, and that year's British Academy Film Award for best editing. Twenty-two years previously, he received a similarly unprecedented double BAFTA for his film editing and sound mixing on Francis Coppola’s The Conversation.

In 1979 he received his first Oscar, for best sound for Apocalypse Now, as well as British and American Academy nominations for his picture editing. He was nominated by both academies in 1978 for best film editing for Julia; and in 1991 received two nominations for best film editing from the American Academy for the films Ghost and The Godfather Part III. In 2004, for the film Cold Mountain, he received a ninth Academy Nomination for Film Editing, as well as British Academy nominations for Film Editing and Sound Mixing.

Walter also directed and co-wrote - with Gill Dennis - the film Return to Oz. His other credits include: picture editing for The Unbearable Lightness of Being, Romeo is Bleeding, The Talented Mr. Ripley, K-19: The Widowmaker, Jarhead, Youth Without Youth and Tetro.

Since 2011, he has directed an episode of Clone Wars for Lucasfilm Animation, edited the HBO feature Hemingway & Gellhorn for Phil Kaufman, edited Particle Fever, a feature documentary on CERN’s Large Hadron Particle Collider and the search for the Higgs boson, and edited the film Tomorrowland for director Brad Bird. He is currently working in London on a feature-length documentary about Operation Ajax, the joint CIA MI6 coup that installed the dictatorship of the Shah of Iran in 1953.

In 2012, Walter was invited to serve as a mentor for the Rolex Mentor and Protégé Arts Initiative, an international philanthropic programme that pairs masters in their disciplines with emerging talents for a year of creative exchange.

He was presented with the 2012 recipient of the Nikola Tesla Award given by the International Press Academy Satellite Awards for ‘Visionary Achievement in Filmmaking Technology’.

Walter has written one book on film editing, In the Blink of an Eye, and been the subject of two other books: The Conversations by Michael Ondaatje; and Behind the Seen, by Charles Koppelman. 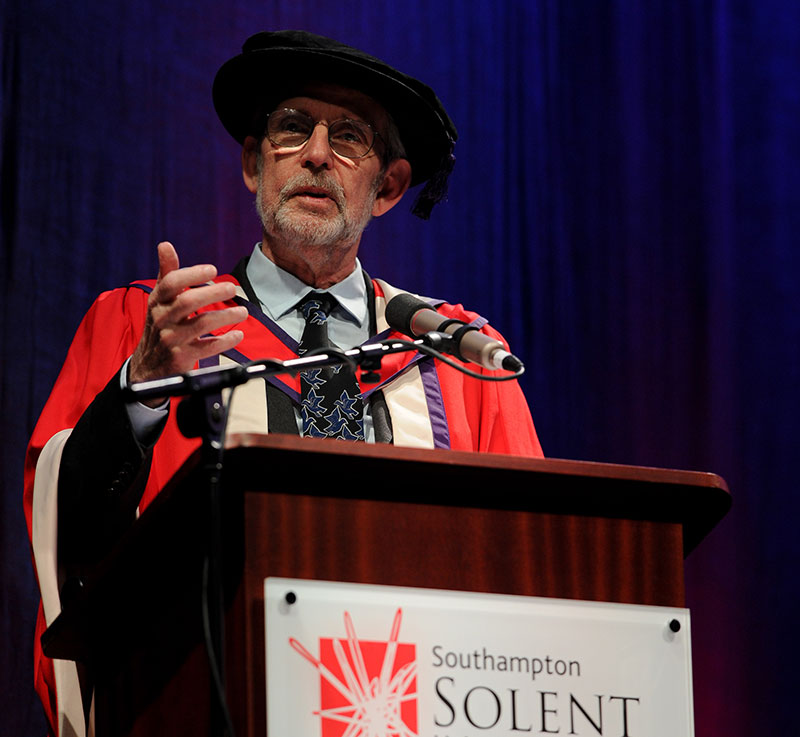 “There are a whole lot of ‘ifs’ that you will ask yourself. I’m here to share a slightly bitter truth; those ifs don’t go away when you enter into the rest of your career, but if you harvest them properly they can be you friend,” Walter said.

Walter’s final words of the ceremony were taken from a letter written by choreographer Martha Graham to her mentee Agnes de Mille with some wise words to remember when things aren’t going quite right. He read a section of the letter, which explained that you will never be completed satisfied with your work, and that there is only ever ‘divine dissatisfaction and blessed unrest’. He ended his speech to graduates with: “To all of you, I wish you a life of divine dissatisfaction and blessed unrest.”