Third-year BSc (Hons) Applied Sport Science student Charlotte celebrated handing in her dissertation with a scintillating 179 not out from just 103 balls, including 21 fours and 4 sixes – the highest individual score in the history of Solent cricket, whether male or female! 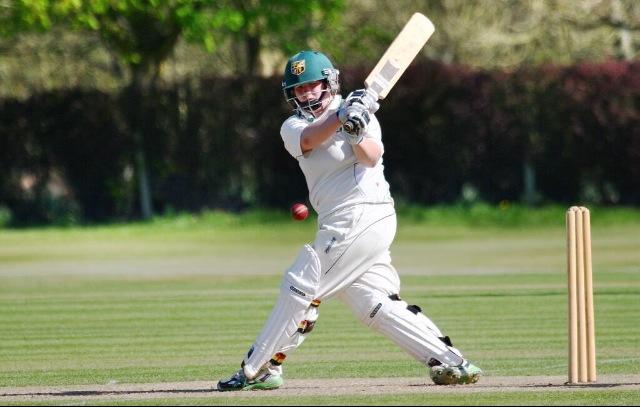 Charlotte has been playing cricket from the age of seven, currently plays for leading club side Hursley Park, and had already represented Hampshire for four years when she came to Solent. “I was born in Southampton, and I chose Solent for a number of reasons: to continue being able to represent my club and county with ease, to create a network of local organisations for future employment that I had already established before coming to Solent, and also because of the high quality reviews and student satisfaction for the sports science course.”

Given Charlotte’s passion for cricket, it’s no surprise that she helped set up Team Solent’s women’s cricket team in her first year at uni. “[Solent Sport director] Phil Green helped me start it back in 2013,” Charlotte says.

“We barely had enough players to make a 6-a-side indoor team, whereas now we have won our outdoor league and we’re turning out 11 players every week… so it’s a massive improvement! I’ve had to find players, organise and run training, collect kit, photos and many other things but it’s all been worth it!”

Team Solent women’s cricket has won all of its BUCS games so far this season, topping the Western 1A league; they’re currently awaiting the results of the other regional leagues to see whether they’ll be in with a chance to compete in a playoff and potentially win promotion to the BUCS Premier South league.

In recognition of Charlotte’s outstanding performance over the 2015/16 sporting year, she was also nominated for Pharmanutricals Sports Woman of the Year at the 2016 Solent Sport Awards – narrowly losing out to triple jumper Lia Stephenson.

Charlotte says: “I did get a chance to chat to Charlotte [Edwards], who has been an inspiration to myself and female cricketers across the world during her international career; she’s a character who will be sorely missed in that England dressing room. She said just to keep enjoying my cricket and that playing in Hobart will be a thrilling experience.”

Now that her career at Southampton Solent is winding down, Charlotte’s looking ahead. “Cricket is my main focus for the near future – next up for me is a six-month season starting in September in Hobart, Tasmania playing and working out there for their upcoming summer season.

“I have really enjoyed my time here, met some amazing people from the Solent team, other sports teams and all the people on my course. As I was fortunate enough to be on the HPA (Solent's high performance academy) this year, I have taken full advantage of all the opportunities, such as my own strength and conditioning coach, who was brilliant throughout my winter season. The general support from the whole HPA team has been outstanding."

For more information on what Solent can offer, explore our Solent Sport or sport and fitness courses pages.