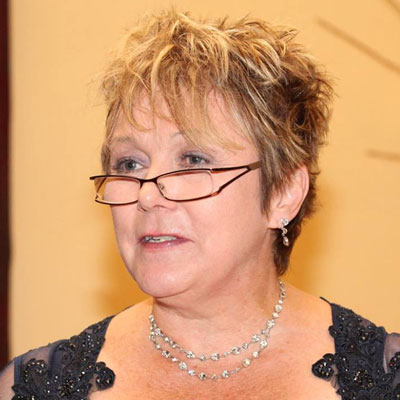 Maggie is a senior lecturer and the course leader for the the BA (Hons) Acting and Performance and BA (Hons) Musical Theatre courses.

Maggie trained as an actor and worked in repertory theatre and the West End before moving to New Zealand in 1989 where she worked extensively in the film and television industry as a casting assistant/director whilst continuing her acting career in international film and TV productions including Shortland Street, Siege, Outrageous Fortune, Hercules, Xena, Sinking of the Rainbow Warrior, Deepwater Haven and Auf Wiedesehen Pet. Film credits include The Most Fun you Can Have Dying, A Stolen Life, The Footstep Man, Angel at my Table, Wound.

Theatre credits include Loretta in Irish Stew, Quills, Kinder Transport, The Snow Queen in The Lion the Witch and the Wardrobe, Winter’s Tale, Charlie’s Aunt, Joking Apart, and recently Meeting Miss Austin. She has also performed in a wide range of radio drama for the BBC World Service and was awarded a Mobil Radio Award for her performance in the Best Documentary or Feature Project.

Maggie has also worked as a theatre director on projects including Abigail’s Party, Under Milkwood, Carpe Jugulum, The Ledge, Ledger and the Legend, Find Me, Gunner Inglorious, Marat/Sade.

Maggie’s Master’s Degree (Distinction) is in Creative Writing. She has written a number of feature length films (not produced) and her short film credits as writer and director include Te Tirohanga, Silver Spoon (which was a finalist in the Magma Short Film Festival 2007), Popping Daisies, Notch, Between Courses, Neighbourhood Watch, Birds of Prey, Identity.

Maggie is one of two UK trained coaches in the Perdekamp Emotional Method (PEM) and holds CL1 certificate in Alba Emoting.

Maggie’s research areas include the impact of digital technologies on theatre, communication and acting. She is also exploring the use of emotions within performance and how this has been influenced by the growth in social media and the resultant changes to the audience/actor relationship.

Maggie is the External Examiner for the University of Chester BA (Hons) Musical Theatre (Shrewsbury).

Maggie worked as a professional actress in the UK from 1984-1989 in repertory theatre, West End theatre, radio drama and television before moving overseas to live. Maggie worked as casting assistant on the Pacific Renaissance Pictures TV production Hercules for four years, during which time she also assisted on The Piano, and Spielberg’s Lost World. She worked as the NZ casting director on Moulin Rouge and numerous NZ and Australian film and TV projects while running her own theatre company producing numerous theatrical productions in Auckland, NZ.

1978: Commendation - Gosforth’s Fete at the International Theatre Festival in Luxembourg.