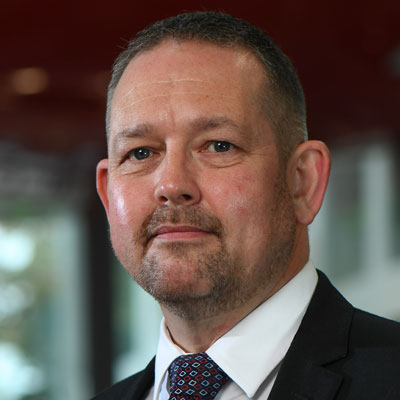 Paul joined Solent University as director of ICT in February 2013. In October 2017 Paul joined the Vice-Chancellor's Group in the new role of Chief Information and Infrastructure Officer (CIIO), with strategic responsibility for the University's estate and facilities, information technology (IT) and management information (MI).

Paul has been actively involved in the design and specification of the technology underpinning the University's estates development programme and has overseen the delivery of a large scale technology refresh programme. He has helped drive better engagement with students through a CRM and business intelligence programme and speaks regularly on the role of integrated information, technology and place on successful student outcomes.

Paul joined the Army in 1986, initially in the field of electronics and logistics, before moving into IT in 1993 as a programmer and data architect in the Army Personnel and Pay Centre. He was involved in developing and supporting database systems for Army pay and personnel projects, during which time he studied for his HNC at Southampton Institute. He then went on to support the development of the Army's unit computing ERP platform and its subsequent deployment to military units in both the UK and Cyprus.

Paul left the Army after 12 years, joining what became Total Gas and Power Ltd, a subsidiary of the French-owned Total petrochemical company. Initially involved in developing database systems, Paul went on to develop and manage the IT support function and introduced IT service management best practice as the company continued to grow and expand its business portfolio.

In 2006, Paul moved into local government, joining Brighton and Hove City Council to lead an IT service improvement programme delivering redesigned customer-centric IT services. He then went on to lead the technical service and delivery teams for the Council, which encompassed voice, data networks, database and desktop services.

In 2009 Paul became Chief Information Officer (CIO) tasked with leading the development of technology and data services to over 5,500 users, partners, and strategic and public stakeholders. While in this role he worked closely with community partners, businesses, and voluntary groups to secure private and public economic investment to the city’s digital economy. He led a complete review of IT systems and processes to deliver organisational, business process and systems change, resulting in an extensive IT overhaul and the introduction of shared service provision. This also included the development of technical and service platforms supporting mobile and flexible working arrangements, including secure access to core systems, enterprise content management, electronic document and records management and converged voice solutions. He also led the creation of a pan-Sussex collaborative working consortium (Sussex LINK) for the procurement of Public Services Network (PSN) and other commodity IT services.