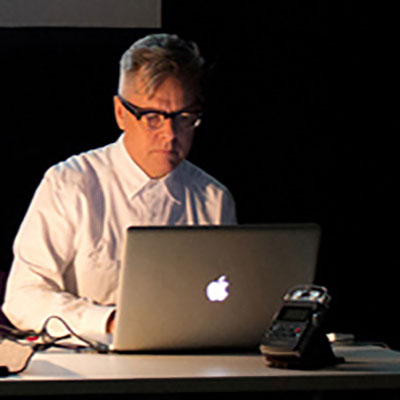 Sebastiane received his PhD from the Sculpture Department of Winchester School of Art (WSA) at the University of Southampton (2002).

With a background in performance art, installation and film, he takes an interdisciplinary approach to creative practice and has performed and exhibited in galleries and museums across the UK and Europe. Most recently his practice has focused on sound art and radio transmission. These works have been published and broadcast on national and international radio stations.

Sebastiane has produced work for BBC Radio and other national and international radio stations.

Sebastiane has taught as a lecturer across a broad range of subjects within the higher education environment. This has included Sculpture (Winchester School of Art, University of Southampton), Fine Art Film and Video, Digital Media, Design Studies and Fine Art (University of Wolverhampton).

Sebastiane’s research and practice is concerned with memory through an investigation of the relationship between time, place and sensation: initially in relation to things, but more recently in relation to sound and its artefact. His current work utilises digital and analogue media in the form of field-recording, soundscape composition FM transmissions and performed sonic actions.

Through his recent practice he has produced works for exhibition, performance, film and radio. Variations of his sound installation rain choir (2013), commissioned for Winchester Cathedral, have been performed and installed in galleries and museums across the UK and Europe. Recent exhibitions and performances include: APT Live 2018 (APT Gallery, London, 2018), Corpora Aliena (Iklectik Art Lab, London, 2018), It’s Eating You (IMT Gallery (London, 2015), Helicotrema, Museum Punta della Dogana (Venice, 2015) and Galerie Díra (Prague, 2014). His radio piece, It’s just where I put my words (2013), commissioned by BBC Radio 3 received wide coverage in national media, including The Guardian, The Independent and The Spectator.

He has delivered papers on his research at conferences in the UK and Eire: LOMA, CRiSAP/LCC, London, 2018, Transient Topographies (University of Ireland in Galway, 2018) He has also contributed to research publications most recently, the Sonic Materialities, edition of the Canadian online audio journal textsound.

Sebastiane has a strong interest in expanded cinema and his essay “Let’s hear what we can see”, accompanies the DVD of Guy Sherwin’s Optical Sound Films 1971-2007 (London: Lux, 2008). His sound works are published through Impulsive Habitat, Gruenrekorder and Very Quiet Records.

Sebastiane is currently working on an extended radio project, exploring sound and tangibility through the performance of micro-FM transmissions at sites associated with the first ‘over the horizon’ transmission by Marconi in 1901.