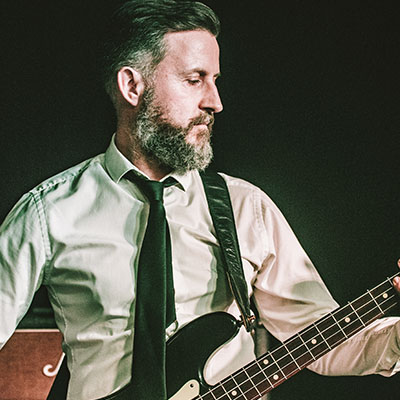 For the past twenty years Pete has balanced an academic career with playing bass guitar in a variety of pop and classical settings.

He studied at Trinity College (London) and gained a First Class BA (Hons) in music from University of York, followed by a DPhil on Charles Ives researched at Yale University (USA) in 1994.

In 1989 he became a founder member of both The Steve Martland Band (Factory Records) and Icebreaker, and went on to play for Ensemble Modern with John Adams, BBC Symphony Orchestra, Royal Philharmonic Orchestra, London Sinfonietta, American Composers Orchestra (Carnegie Hall) and in several BBC Proms (Royal Albert Hall). He has commissioned and performed a bass guitar concerto by composer Colin Riley.

Pete has taught at Guildhall School of Music and Drama, Dartington College of Arts, University of York and headed the BA (Hons) programme at Brighton Institute of Modern Music from its inception in 2003. He has been external examiner for University College Cork, University of Central England (UCE Birmingham), Tech Music Schools, Leeds College of Music, University of The West of Scotland, University of West London.

Pete’s practical research interests lie in the use of bass guitar in contemporary classical music. He has played for many ensembles and crossover projects:

Pete still plays regularly with Icebreaker, a band he’s been playing with since 1989. The group has toured the world and acquired the odd well-known fan along the way: