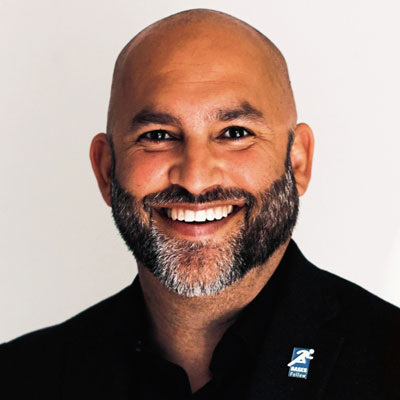 Adam joined Solent University in August 2016 to take up the role of Head of Sport Science and Performance. He is currently the Deputy Chair and a Director of the British Association of Sport and Exercise Sciences (BASES), the UK’s professional body for Sport and Exercise Science. He also Chairs the BASES Division of Biomechanics and Motor Behaviour and the Biomechanics Interest Group (BIG).

He is an Accredited Sport and Exercise Scientist (Research and Pedagogy), specialising in biomechanics, a Chartered Scientist (CSci) with the Science Council, and a Senior Fellow of the Higher Education Academy (HEA).

Adam has a vast amount of experience working in elite sport, having advised Premier League and Championship football clubs, British Judo and British Gymnastics and assisted with athlete preparation during Olympic and Paralympic Games.

A former researcher with NASA’s Biomedical Office at the Kennedy Space Centre, where he investigated musculoskeletal alterations during space flight, he continues his research in this field with a focus on the use of vibration exercise to improve musculoskeletal health and performance in a variety of groups (including astronauts, athletes and ageing populations).

He has recently written two chapters for Routledge’s Handbook of Sports Therapy, Injury Assessment and Rehabilitation (“Clinical Assessment in Sports Therapy” and “The ankle and foot region: anatomy, assessment and injuries”). Adam has also been invited by Routledge to write the latest edition of “Introduction to Sports Biomechanics: Analysing Human Movement”, the seminal text previously edited by Roger Bartlett.

As a Director of BASES, Adam is involved in strategic planning and is the associations lead for professional accreditation and undergraduate endorsement. In these roles Adam regularly collaborates with organisations such as the English Institute of Sport, Sport England and the Football Association; in addition to working with UK universities and government departments. He has also recently been involved in Memorandum of Understanding with Exercise and Sports Science Australia (ESSA: Australian equivalent to BASES), agreement to join the Royal College of General Practitioners (RCGP) Physical Activity and Lifestyle (PAL) project, and a partnership with the Premier League.

He regularly consults with professional sports clubs (including Premier League and Championship football teams) and individual athletes: most notably he was an Official Biomechanics Expert at London 2012 Olympic/Paralympic Games.

Since 2013 Adam has been a member of the Scientific Advisor Board for M.I.E. Medical Research, providing independent research testing of their FitQuestTM system.

Since 2014 Adam has held the prestigious position of Honorary Lecturer in Sports Medicine and Biomechanics within the Ninewells Hospital and Medical School, part of the School of Medicine at the University of Dundee. He continues to provide expert biomechanical input to staff and student projects and initiatives in both the School’s Department of Orthopaedic and Trauma Surgery and the Institute of Motion Analysis and Research (IMAR). http://www.orthopaedics.dundee.ac.uk/imar.php

Adam has also previously been Academic Curriculum Manager (previously Director of Academic Programmes) at Abertay University (2014-2016) and Course Leader in Sport and Exercise Science at the University of Wolverhampton (2005-2014).

Author of the 4th Edition of Routledge’s “Introduction to Sport Biomechanics: Analysing Human Movement Patterns”. Taking over from Roger Bartlett to write the latest version of the seminal textbook in Sports Biomechanics. While this will be a single-authored text it will involve collaboration with some of the world’s leading biomechanics experts to develop example case studies.

Biomechanics lead supporting a project to assist HSX Antarctica, led by Joe Doherty, to become the first Scout expedition in the world to ski to the South Pole then kite ski back, a total distance of 1,400 miles.

Involved in a collaborative project with Bournemouth University to examine the effects of a new form of knee replacement upon the ability to perform various tasks, including walking, jogging, and turning.

Adam is also the sport science and performance lead supporting an Atlantic rowing challenge by firemen Adam Bundle and Stu Vince from Hampshire Fire and Rescue Service to set a new Atlantic crossing record (while raising money for local charities).