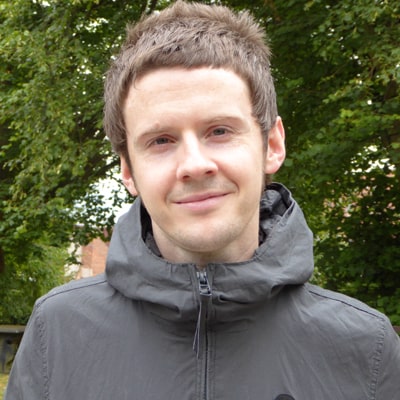 Dr David Webber is a senior lecturer on the Football Performance and Participation programme, and a member of the Lawrie McMenemy Centre for Football Research.

David’s research continues his original interest in British politics and IPE, but has developed to examine the political, economic and cultural changes that English football has undergone over the past 30 years. With one monograph already under his belt, Global Statesman (Edinburgh University Press, 2017), which examined the international development policies of the former Chancellor of the Exchequer and Prime Minister, Gordon Brown, David has gone on to write a number of research articles relating to the cultural political economy of football. These have included an analysis of English football’s ‘great transformation’, the ‘conspicuous consumption’ of clubs, the impacts of austerity upon the game’s local communities, and, more recently, the proposed sale of Wembley Stadium and what it would mean for grassroots football.

A member of the Political Studies Association Sport and Politics group and sub-editor of the Football Collective, David has also worked with a number of organisations including Liverpool Football Club, the Football Supporters Federation and the Spirit of Shankly. He has made a number of local, national and international media appearances to discuss issues relating to the governance and political economy of football.

David has made a number of media appearances to discuss issues relating to the governance and political economy of sport, including the ongoing US-led investigations into the affairs of FIFA officials; the Hillsborough inquests; the likely impacts of Brexit upon sport; increasing transfer fees; and the fan violence at Euro 2016. He has also provided analysis of a number of Premier League, UEFA Champions League, and FIFA World Cup matches for a variety of broadcasters.

He has been interviewed on various BBC radio stations and appeared live on ITV News (local and national), Sky News, Sky Sports News, Al Jazeera, CNN, Euronews, France 24, abc (Australia), CTV and Business News Network (both Canada). David’s analysis of these issues has also been picked up by Reuters and the Press Association and published in the online and print editions of BBC Sport, Bloomberg, City A.M., Daily Express, Daily Telegraph, The Economist, Independent, New Statesman, Today (Singapore) and the Washington Post.

David has also worked closely with Liverpool Football Club, and its Academy as part of a widening participation project. He has also worked with supporter groups such as the Spirit of Shankly and the Football Supporters Federation over the issue of safe standing. David also submitted evidence to a Parliamentary Select Committee Inquiry into the proposed sale of Wembley Stadium.

David has more than ten years’ experience teaching across a wide range of subjects and disciplines across the all levels of the undergraduate curriculum, and in postgraduate seminars and classes on a variety of MA, MSc and MBA programmes. He has also co-supervised to successful completion one PhD, and is currently supervising another.

Prior to arriving at Solent, David convened modules as diverse as Introduction to Politics, The Politics of International Development, Politics in the UK, The Making of Economic Policy, Gender and Development, Gender and Global Politics, and The Cultural Political Economy of Sport. This particular module was designed from scratch and encouraged final year undergraduates to consider critically the social and cultural value of sport; the relationship between sport and politics; the political sociology of sport; sport and business; sport as a site of cultural commodification and consumption; ethnicity, race and racism in sport; sport, gender and sexuality; sport and national identities; sport and the politics of resistance; sport and globalisation; global sports governance; sport ‘mega-events’; sport and the changing dynamics of the global economy; and sport as a tool for social change, development and peace building.

At Solent, David leads the final year module, Globalisation of Football, and teaches on the second year modules, Sociology of Football and Researching Football. Each year, David will also supervise a number of finalists as they complete their research projects.

David’s research continues his original interest in British politics and IPE but develops it to examine the political, economic and cultural changes that English football has undergone over the past 30 years.

Rooted in his previous studies in the subfields of British politics and IPE, David’s research has evolved to examine what Karl Polanyi might have termed the ‘great transformation’ that English football has undergone over the past 30 years. Here David draws upon the frameworks of critical IPE to offer an analysis of the sport in this period of late capitalism. These accounts are used to explore the political origins of English football’s increasingly global marketization, and the contested cultural politics present in the reproduction of the game’s neoliberal subjectivities. These frameworks are instructive not simply in terms of the historical analysis they offer of the contemporary football industry, but because of the possibilities they imagine of a more sustainable, inclusive and equitable post-capitalist future.

David is particularly interested in supervising undergraduate, postgraduate and doctoral projects that might fall under these areas of study.

Webber, D. M. (2020) Towards an ‘everyday’ cultural political economy of English football: conceptualising the futures of Wembley Stadium and the grassroots game in England. Forthcoming.

Webber, D. M. (2017). The Great Transformation of the English game: Karl Polanyi and the double movement ‘Against Modern Football'. In B. Garcia and J. Zheng (eds.) (2017) Whose Game Is It? Supporter Activism and Regulation in European Football. London: Palgrave, 9-26.

David is currently working on a number of research projects including the politics of crisis and solidarity in the response of the Premier League’s to COVID-19 (co-authored with Dr Hannah Webber); the political economy of UEFA’s Financial Fair Play regulations and cultural production of elite European football; the hegemony established by the Premier League; and the post-development politics of ‘ambassadorial activism’ of elite Premier League clubs.