A former graduate and Managing Director of Cloud UKI, one of the world's largest IT software companies, was awarded an honorary degree from Solent University.

A former graduate and the Managing Director of Cloud UKI, one of the world’s largest IT software companies, was awarded the honorary degree of Master of Business Administration by Solent University on Wednesday 18 November.

Kevin Kimber graduated from Southampton Solent in 2000 with a BA (Hons) in Business Management and is currently the Managing Director of Cloud UKI at SAP – listed on the New York Stock Exchange (market capitalisation of $89.5 billion in April 2015). 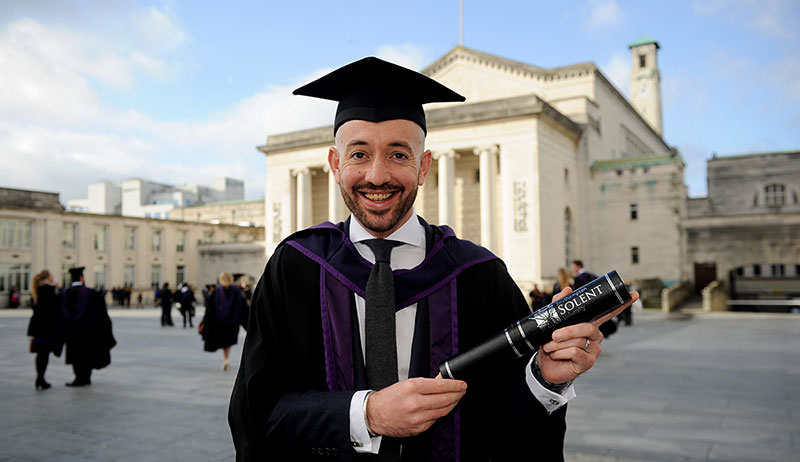 On receiving his award he said: “I am supremely honoured and incredibly proud to receive this award, especially in the year that Solent has achieved 10 years of university status.”

Speaking to the assembled graduates, Kimber said: “The business school at Solent has a fantastic reputation for providing excellent employability and industry knowledge.

“The biggest thing the University taught me was the focus around pushing your horizons,” he continued. “The University and the lecturers here encouraged both an entrepreneurial atmosphere in the lectures and seminars and a ‘can do, will do’ attitude; and that is an attitude that I have ultimately gone on to live my life by, both inside and outside of work.”

Over the past 12 years, Kimber has launched and scaled Cloud software businesses across the globe, gaining extensive management, commercial and operational experience in both public and privately held companies.

Kimber joined SAP in 2014 to run the cloud business in the UK and is responsible for SAP’s largest and most strategic customers in the region.  His team works closely with SAP UKI’s large enterprise customers to help them leverage their existing investments and take advantage of new technologies.

Before joining SAP, Kimber was responsible for the EMEA (Europe, Middle East and Asia) operations at cloud services provider, Zuora.

Kimber worked for ServiceNow from 2006-2012. As founder of its EMEA operations, he was part of the team that saw the company reach the $100 million global revenue point in March 2011, faster than any other enterprise IT technology vendor. ServiceNow is also listed on the New York Stock Exchange (market capitalisation of $12.1 billion in April 2015).

Kevin is a regular industry speaker and often returns to Southampton Solent to give guest lectures to current students.

He finished up by saying: “It’s a fantastic time to be graduating.  There are huge amounts of opportunity within the market place.” He continued, “…there are great careers out there but make sure it’s something you really want to do.”

Almost 2,500 students will be graduating with degrees and professional qualifications from Southampton n Solent University during ten ceremonies over five days (16-20 November).