Award-winning filmmaker and visual effects designer, Paul Franklin, has been awarded the honorary degree of Doctor of Art by Solent University today.

Paul started out his career by making short films with his friends in the 1980s. Paul soon became one of the first 3D computer animators in the British video games industry, working at Sony where he worked on some of the early Play Station games.

In the 1990’s, Paul began to create visual effects for film, starting with Iain Softley’s film Hackers (1995) which starred a young Angelina Jolie and went on to become a cult movie. He also created the visual effects for The English Patient (1996) and The Borrowers (1997) during this period.

Moving into the world of business, Paul, along with some of his trusted colleagues, founded Double Negative Visual Effects (DNEG) in 1998. Paul set up and spearheaded the company’s new 3D animation department, where he went on to supervise the computer graphics for the film Pitch Black (2000).

Paul is perhaps best known for his ten-year partnership with British director, Christopher Nolan, creating visual effects for all three films in the Dark Knight trilogy. His partnership with Nolan also saw him work on Inception (2010) and Interstellar (2014), both of which earned an Oscar and BAFTA award for the Best Visual Effects. 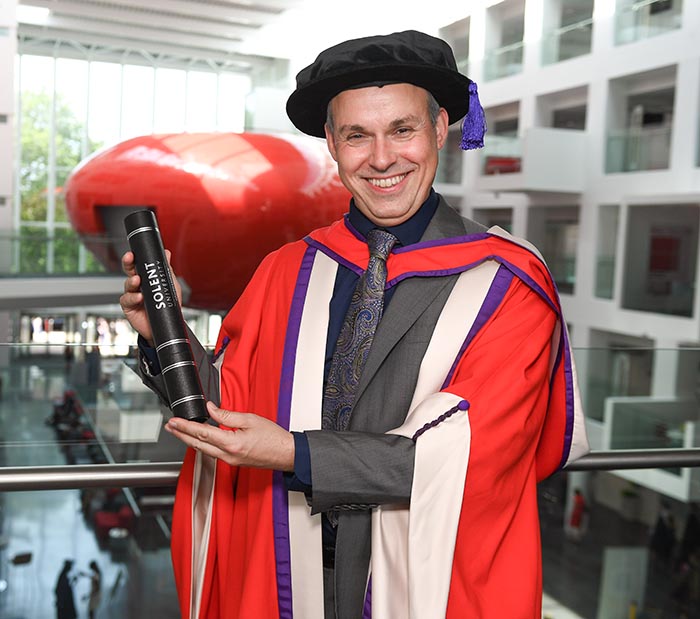 In 2017, Paul made his directorial debut with his short film The Escape which received its world-wide premiere at the 2017 Tribeca Film Festival in New York City. He now serves as DNEG’s Creative Director, and in this role he has become an inspiring figure for those who wish to follow in his footsteps. He often visits Solent University as a guest lecturer to offer inspirational talks to students, and moreover, invite them to DNEG studios in London to gain first-hand experience in film production.

Commenting on his honorary award, Paul said: “Being recognised by Solent University in this way means so much, and I look forward to continuing our relationship by providing their students with as much advice as possible to help them develop their own careers in the film industry.”