Sir Peter Blake, 'Godfather' of British pop art, received an honorary degree of Doctor of Arts from Southampton Solent University today in recognition of his outstanding contribution to the entertainment industry and for his services to art.

Sir Peter Blake received an honorary degree of Doctor of Arts from Southampton Solent University today in recognition of his outstanding contribution to the entertainment industry and for his services to art. Southampton Solent has benefited enormously from the support given by Sir Peter.

He officially opened the new School of Art and Design in June 2012 and, last year, donated two of his drawings to be auctioned by students at an illustration fund-raising event that allowed students to hire a gallery in the West End of London to launch and promote their careers following their Degree Show. He is also involved in the University’s current show, ‘Strange Folk’. 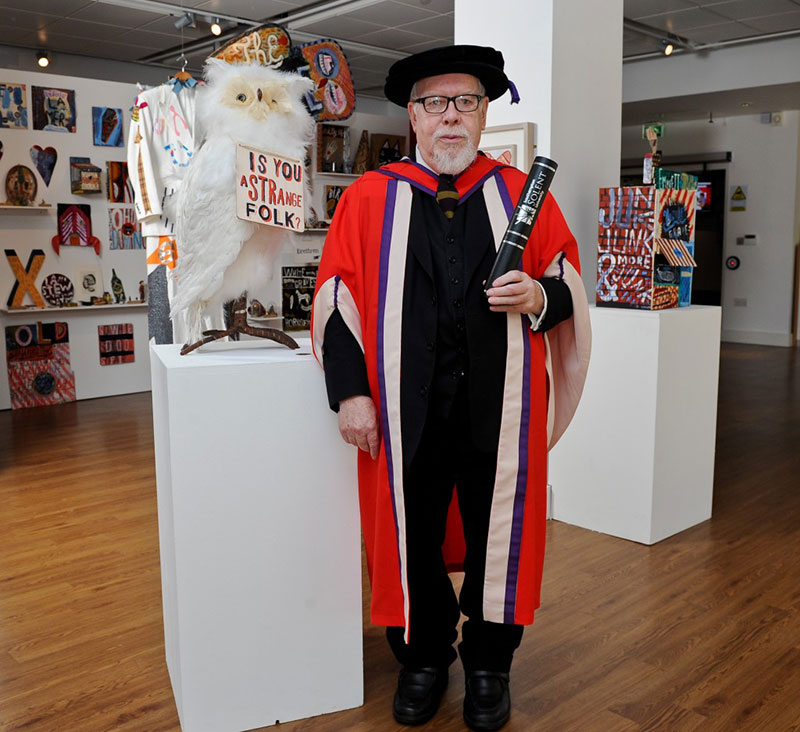 Addressing graduates at the awards ceremony, Sir Peter said: “I’m delighted to receive this honorary degree. I’ve been an artist for nearly 70 years and I’m still working: a mural at the Albert Hall; a watercolour of Eric Clapton; graphics for a new TV show; decorating the ferry that crosses the Mersey. I tell you this to encourage you, wonderful things happen as an artist and I’ve had a terrific career. Today is the beginning of your road as a professional – good luck to you all in your careers. I hope you’re as lucky, successful and happy as I’ve been.”

As an artist of international standing Sir Peter Blake, who originally hails from Dartford in Kent, is widely regarded as the ‘Godfather’ of British Pop Art and has produced iconic album covers for the Beatles, Paul Weller, the Who and Oasis. Sir Peter has contributed significantly to the teaching of visual areas during his career and, during the 1960s and 70s taught at various institutions including St Martin’s School of Art (before it merged with the Central School of Art and Design to become Central Saint Martin’s School of Art and Design), Harrow School of Art, Walthamstow School of Art and the Royal College of Art. Alongside his teaching, Sir Peter continued with his own art, exhibiting in many individual and group shows, both domestically and internationally. In 1969 Blake left London to live in the West Country where he was a founding member of the Brotherhood of Ruralists in 1975. During this period his work moved away from the glossy commercial pop art for which he is most celebrated and focused on literary and rural subjects in oil. Sir Peter became a Royal Academician in 1981, was appointed a CBE in 1983 and awarded a further honour in 2002 when he became a Knight Bachelor for his services to art.